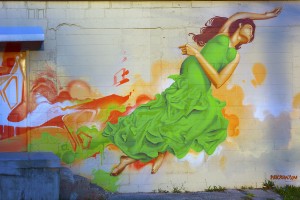 If you’re paying attention, you can see a lot of great art in Indianapolis just by turning your head, whether you’re exploring on foot, on a bike, or even on your way to work. Whether it’s one of the 46 murals painted for the 2012 Super Bowl, the array of pieces greeting travelers at the Indianapolis International Airport, or the wry, user-friendly populism of Jamie Pawlus’s “Care/Don’t Care” along the Cultural Trail, art is easy to find in everyday Indianapolis, even outside of traditional museums or galleries.

It hasn’t always been this way. There was a time when the vast majority of public art in Indianapolis was in the form of monuments and statues—most of them war-related—and most residing within the seven-block war memorial district downtown. In fact, Indianapolis is still second only to Washington, D.C., in number of war memorials.

Richard McCoy sees the shift in the city’s art landscape as a positive. He’s the director of Landmark Columbus, a new effort to care for Columbus, Indiana’s design heritage. He was also, for ten years, conservator of objects and variable art at the Indianapolis Museum of Art, and as part of his job cared for the museum’s extensive outdoor sculpture collection.

“We were a war memorial city, a place filled with a sense of patriotism,” McCoy said. “Those ideas had a dominant visual hold on the city. It’s good we’re seeing art around the city that starts to compete and provide another narrative. In fact, it’s really important.”

Mindy Taylor Ross of Art Strategies LLC (one of our Public Collection partners) has seen this process firsthand. During the ’00s, she helped the Arts Council of Indianapolis implement its Public Art Master Plan. “In the last decade,” Ross said, “Indianapolis has embraced more of an interest in art for art’s sake, as well as a means to build a sense of community and economic development.”

Art’s economic impact can be huge. A recent study of the Indianapolis Cultural Trail, which features numerous works of public art, found that property values within one block of the trail have increased 148 percent since 2008, a total increase of $1 billion. Next to exercise, this study found, the most popular use of the trail has been sightseeing, and nearly one in five survey respondents said that art was what they would most like to see more of along the trail, second only to restaurants.

To McCoy, the extent of public art’s impact is not surprising. And he says it really shouldn’t be just about the money. “I hate to put it in those terms,” he said, “because that makes it all about a one-to-one relationship, art to money, and there’s a greater value here. The kind of art we’re seeing now is something that makes Indianapolis exciting, interesting, and relevant. It helps create a culture that can bring the kind of employees companies want to hire, because it makes those people happy to move here and to tell their friends that Indianapolis is a cool place to live.”

Ross agrees that the real impact is at the personal level. “Art is not about keeping people out; it’s about inviting people in,” she said. “We need to rid art of that elitist air that hangs about it here in the United States. Art is for everyone, and public art removes barriers, whether physical barriers or the barriers of buying tickets or making special trips.

“The Public Collection connects to the idea that art and culture are for everyone. It’s a platform to showcase the great artists of our city and state, and everyone has the ability to come and interact with it.”

The Public Collection book share stations do invite interaction. In Brose Partington’s “Harvesting Knowledge,” viewers turn a wheel to “dig up” the books on offer, a nod to City Market’s history as a center for farmers’ markets and food vendors. LaShawnda Crowe Storm’s “Play Station” is a mobile library and play center for children, constructed on a Red Flyer Wagon. And Tom Torluemke’s “Cool Books, Food for Thought” takes the shape of a welcoming wooden refrigerator, with books and magazines lining its shelves and door rack. All the book share stations invite visitors to come up close and select a book.

Ross and project creator Rachel Simon began the curatorial process by reaching out directly to artists. “We created a short list of a cross-section of artists who work in a variety of media and in a variety of ways. Then we began pairing each artist with a site where we believed their artistic practice could have real impact,” Ross said.

They solicited two proposals for each site. This offered site partners more input into the design process, and still maintained the artists’ freedom to create within the project’s site-specific framework.

Ross cited Brian McCutcheon’s “Monument, 2015,” which will live on Monument Circle, as an example of how the process worked.

“Brian nailed it with that project, which uses the language of monuments, but makes it contemporary with the use of the acid green color.” She explained that the scale of each piece, including McCutcheon’s, has also been taken into account. “Eighty feet might seem long, but it has to have a presence that’s proportionate to the [Soldiers’ and Sailors’] Monument and the buildings around it.”

McCoy, too, is excited about The Public Collection and its contribution to the city. “It’s different,” he said, “it’s funky, it’s human scale. Books are human-scale objects. These are functional bookshelves and objects of art. It creates moments of beauty and allows for visual inquiry.”

He sees The Public Collection as being integral to where Indianapolis is headed. “Particularly in downtown Indianapolis,” he said, “we’re in a period of transition and growth, and things in five years are going to look a lot different. This project is going to be an exciting and interesting part of our new landscape.”