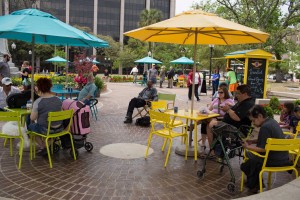 On any given weekday, if you feel like people-watching, you can see some intensely social interactions happening around downtown Indianapolis. On Monument Circle, in White River State Prak, and especially at City Market—either inside where the food is, or outside, near Brose Partington’s book share station, Harvesting Knowledge, where friends spin the wheel together to see what’s new on the shelves. This is true especially on Farmer’s Market Wednesdays, when the square is packed with folks of all ages.

All of the Public Collection stations strengthen community by inviting downtown workers and residents to stop and browse, and to pause on their journeys through some of the city’s busiest public spaces.

Brian McCutcheon’s Monument, 2015, on Monument Circle, with its bold, lime green paint job, continues to draw huge numbers of daytime browsers. The books, according to Public Collection partner The Indianapolis Public Library, have to be replenished several times per week. Kimberly McNeelan’s The Evolution of Reading invites park-goers at White River State Park to crawl in and explore. And Eric Nordgulen’s Topiary, on the Cultural Trail, has been known to stop even the most laser-focused cyclist or jogger, whose eye has been caught by the bright book spines that almost appear to float within its twining white vines. 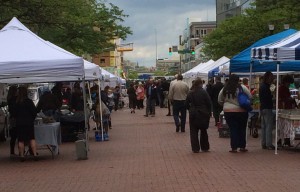 These people-rich downtown spaces have what urban designers refer to as “soft edges.” The words “soft edge” mean a façade where a lot of things happen. Pioneering urban designer Jan Gehl has offered these examples: “It could be many doors, niches, or the vegetable seller putting out his tomatoes on the street. Soft edges could be the front yard where the kids are playing and grandma is sitting knitting just behind the hedge.” The beauty of these details is in how it appeals to the average pedestrian, who travels at a much slower speed than an urban automobile (around 10 times more slowly than someone inside a car).

Gehl’s insights are part of a movement called placemaking, an idea popularized by the nonprofit group Project for Public Places (PPS), which was founded over 40 years ago to expand on the pioneering work of sociologist and urbanist William H. Whyte. Placemaking is all about this idea of “strengthening the connection” between people and places and creating “quality public spaces that contribute to people’s health, happiness, and well being.” It’s about streets, markets, and downtowns. It’s about public squares and public parks. But more than that, it’s about getting people to want to be in those places. As Yogi Berra put it (in a quote that’s also featured on PPS’s website), “If the people don’t want to come out to the park, nobody is going to stop ’em.”

That’s really the point. The more we encourage people to stop—to look, talk, play, and explore—the more they’ll stop by, or be drawn purposefully to return. These pauses they make are also opportunities: to build community, to enrich lives, and provide access to art and literature.

Last summer, Big Car Collaborative and the City of Indianapolis partnered for Spark: Monument Circle, an 11-week placemaking experiment. The outside lane of traffic on the circle was closed, and cozy gathering spaces with moveable tables and chairs were set off using planters full of flowers. Fun games and thought-provoking art activities were close at hand, among them ping-pong, a listening booth, and the Wagon of Wonders—Big Car’s mobile interactive art unit.

During the event, according to surveys and data counts, three times as many people sat outside during lunch on nice days, as compared to similar days before and after the experiment. And nearly nine in 10 of the same respondents reported having a conversation with someone new. 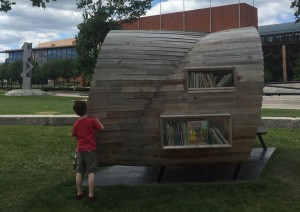 When we look at cities from above and far away, we can see certain patterns, some of them useful: in routing traffic, for instance, or assessing the density of green space. This perspective has informed much about the ways our cities have developed since the 1940s and ‘50s. For a city like Indianapolis, which experienced explosive growth during those periods, this kind of planning contributed significantly to the shape of the metro area.

But that bird’s-eye perspective is meaningless in terms of the way we, the people, experience our everyday lives. People look at the world from eye level, at a walking pace. At least, that’s how most of us prefer to see it.

When we have enough beautiful and interesting people, places, and things to look at, it really doesn’t take much of a push. What it does take is some careful thought, and deliberate preparation. The rest is human nature.

Have time for a little experiment? It won’t take long, and you won’t even have to step away from your computer.

In separate browser tabs, open up this pair of live webcams: one from the Temple Bar in Dublin, the other from London’s Abbey Road. Do this during daylight (GMT) hours (keeping in mind that these cities are five hours ahead of U.S. Eastern time). Flip back and forth between them for a while. What do you notice?

What you’ll see, in both views, are people, many of them tourists, standing in (or around) city streets.

In the Abbey Road view, some of these people will look frozen in place, recreating their own version of the iconic Beatles album cover. Others are just passing through. Some may stop and sit a while on the low, brick wall at the left. But most likely, they won’t stay long. 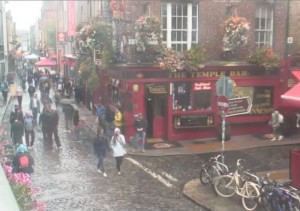 At Temple Bar, on the other hand, you’ll see a lot more stopping and looking. You’ll probably see people gathering and socializing along the front of the building, where a narrow bench protrudes. If you catch this street during its afternoon or evening hours, the streets will likely be so crowded with people, you might think that these are pedestrian walkways. In fact, cars and trucks are allowed on these streets; they simply avoid them during the times that people are most active.

It’s a quick way to get a look at soft edges in action. And a good reminder of how the little things, both planned and unexpected, can bring communities together and make our lives brighter and more interesting.

Picture-Perfect: The Art of the Picture Book