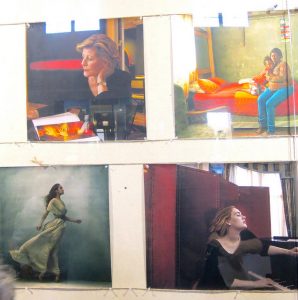 The last several months have been tough ones for peace and tolerance in America. Hate is on the rise. During the 10 days immediately after November 8, the Southern Poverty Law Center—which monitors hate and extremist groups across the country—tracked 867 non-online hate incidents. These hate incidents happened on streets, in stores, and at workplaces. They happened at people’s homes and places of worship. And most commonly—nearly 40 percent of the time—they happened at schools or universities.

Artists around the world have been wrestling with their own responses to the hate.

The voice of art has many registers: practical dialogue, wrenching empathy, anguished wail. Another register is hope: In late November, artist Sam Durant’s lighted sign “End White Supremacy” was raised once again above the Paula Cooper gallery in New York City. The sign last hung there during the 2008 presidential campaign; it was removed shortly after President Obama’s first inauguration.

None of us need be silent in the face of hate. This year, let us find ways to combine our voices, our talents, and our respect for one another—in order to make our community whole.

Picture-Perfect: The Art of the Picture Book